Учебная презентация "All about Scotland", 7 класс 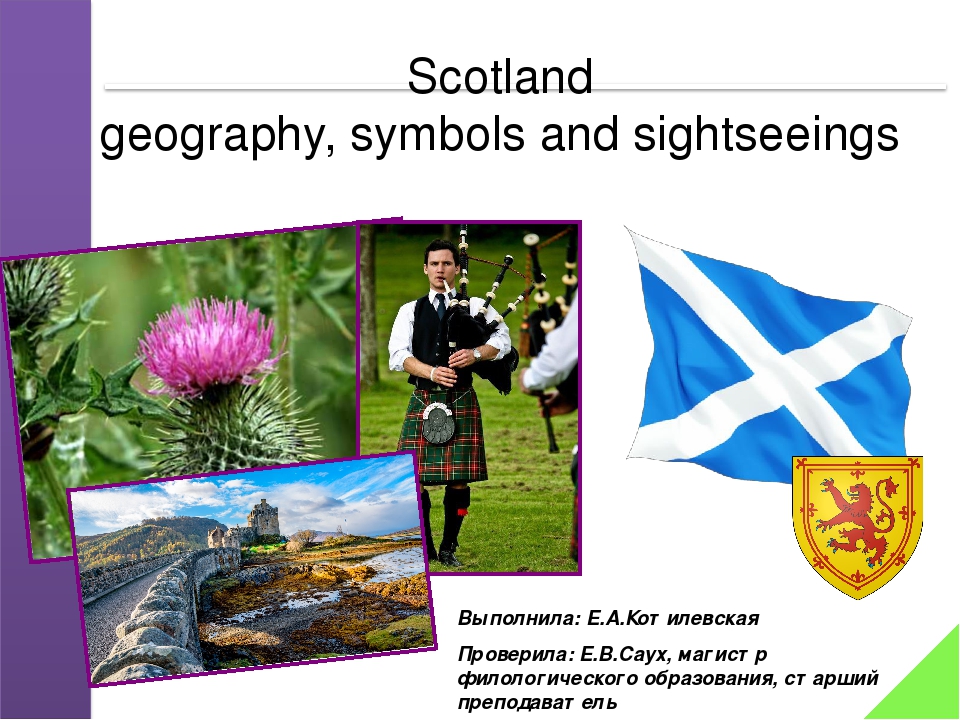 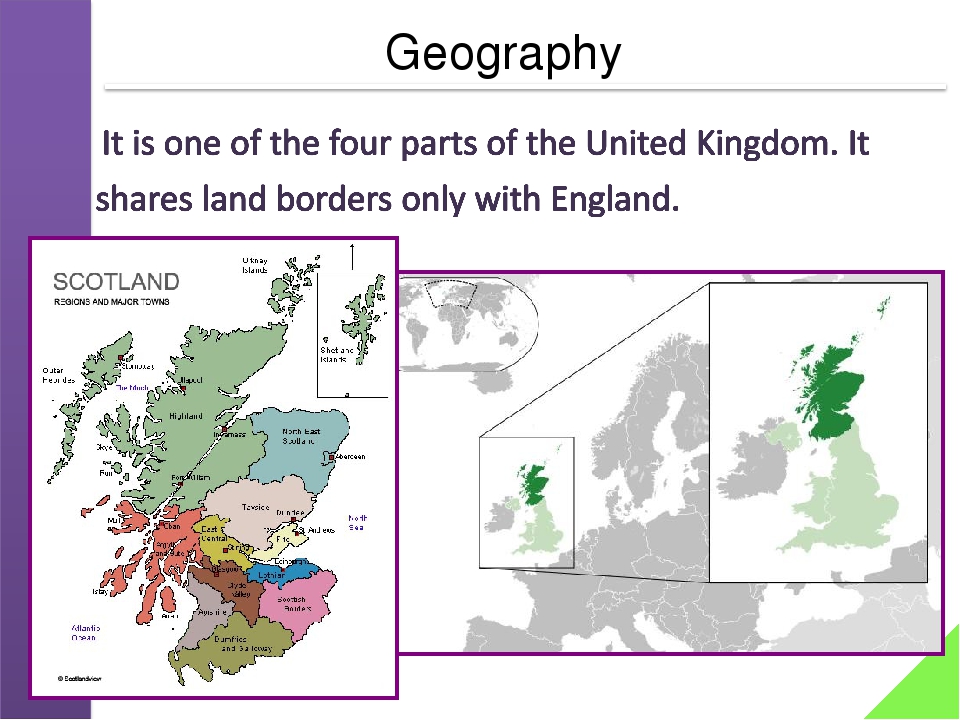 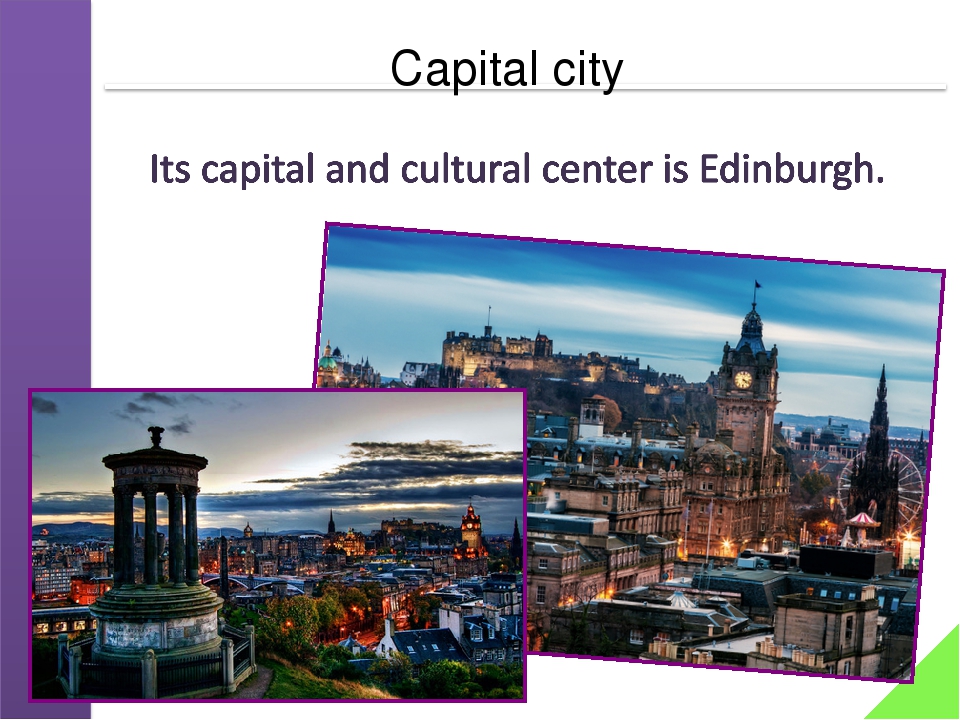 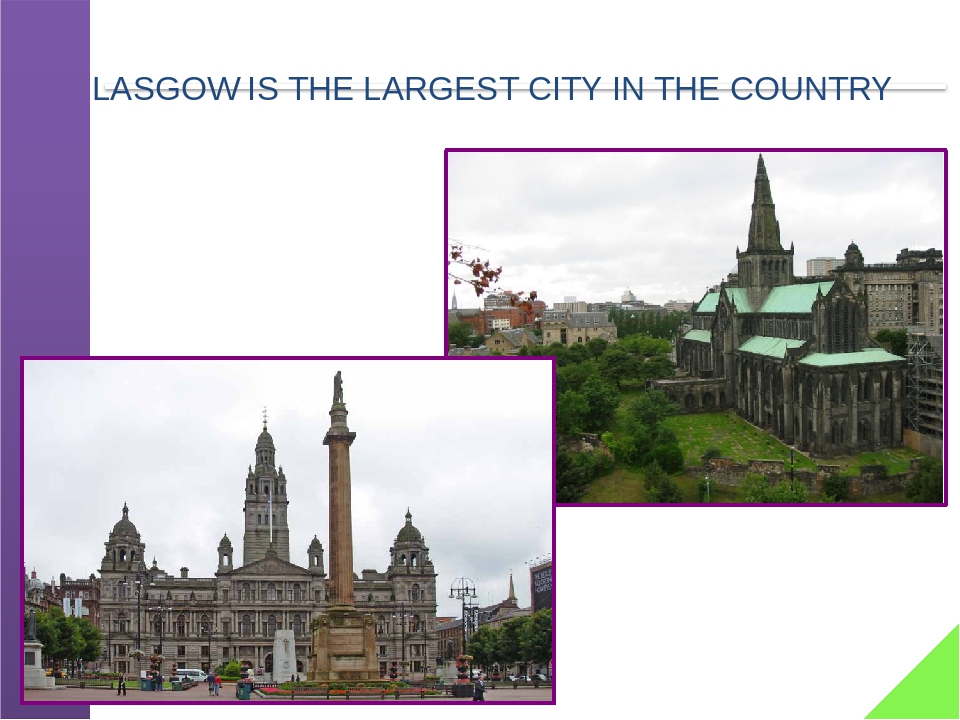 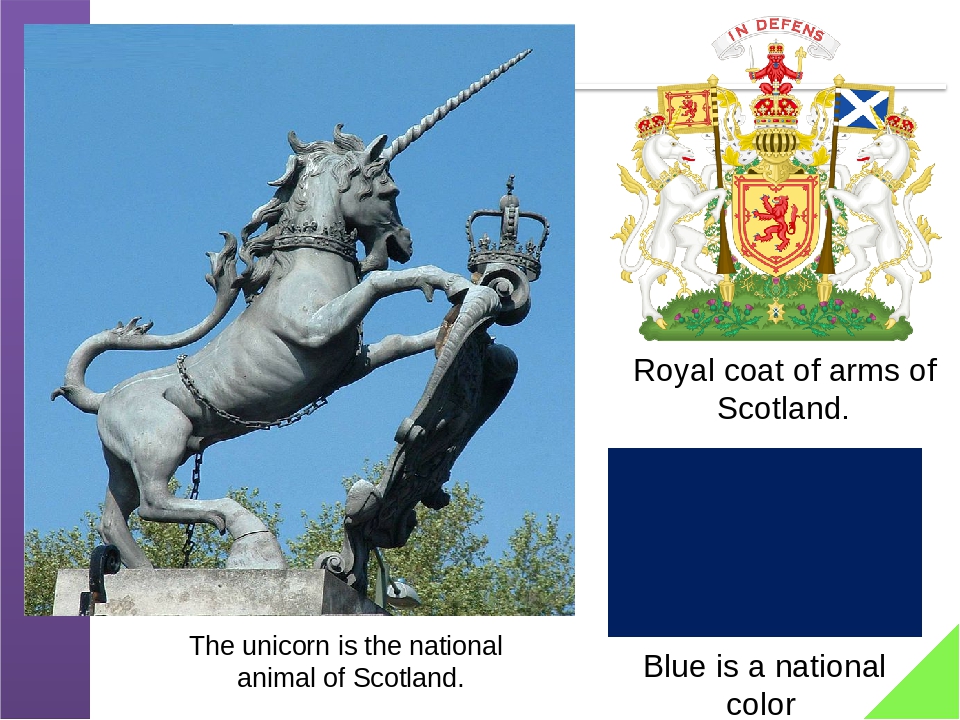 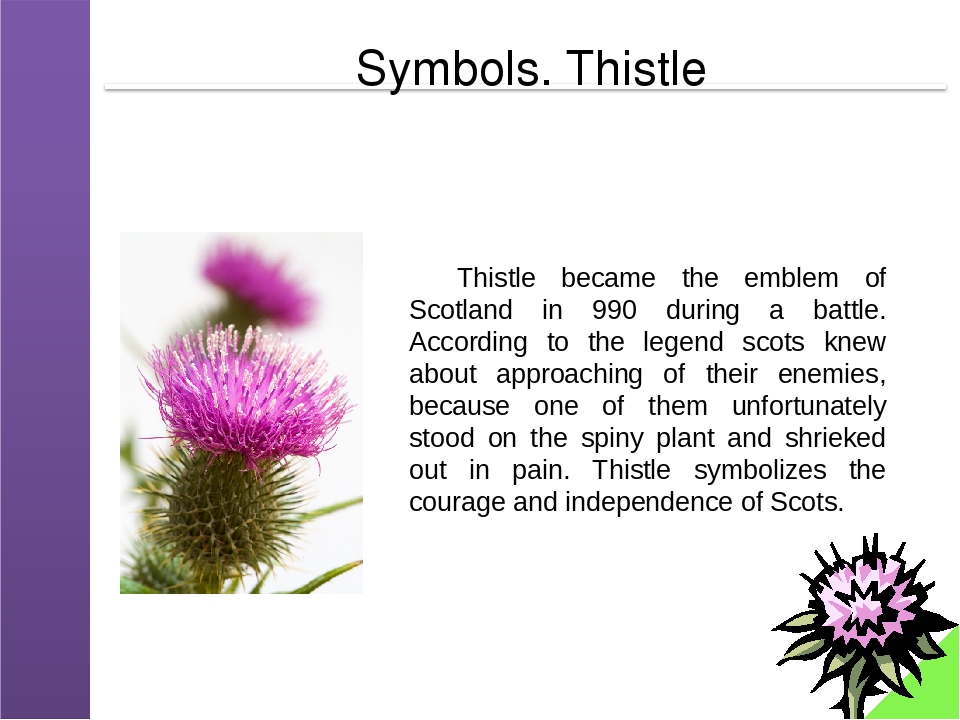 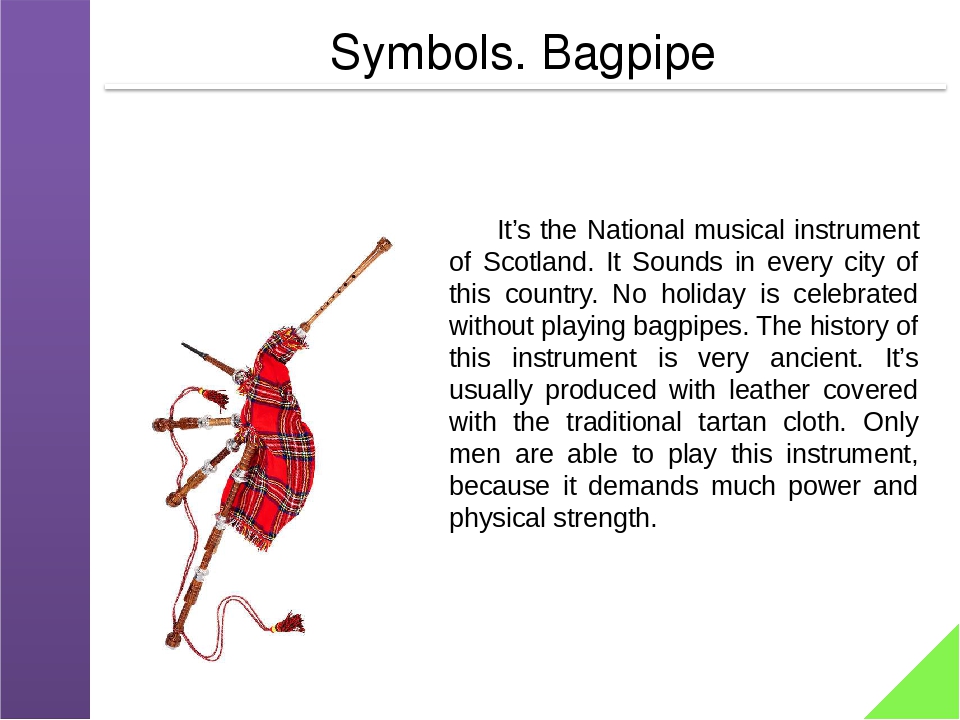 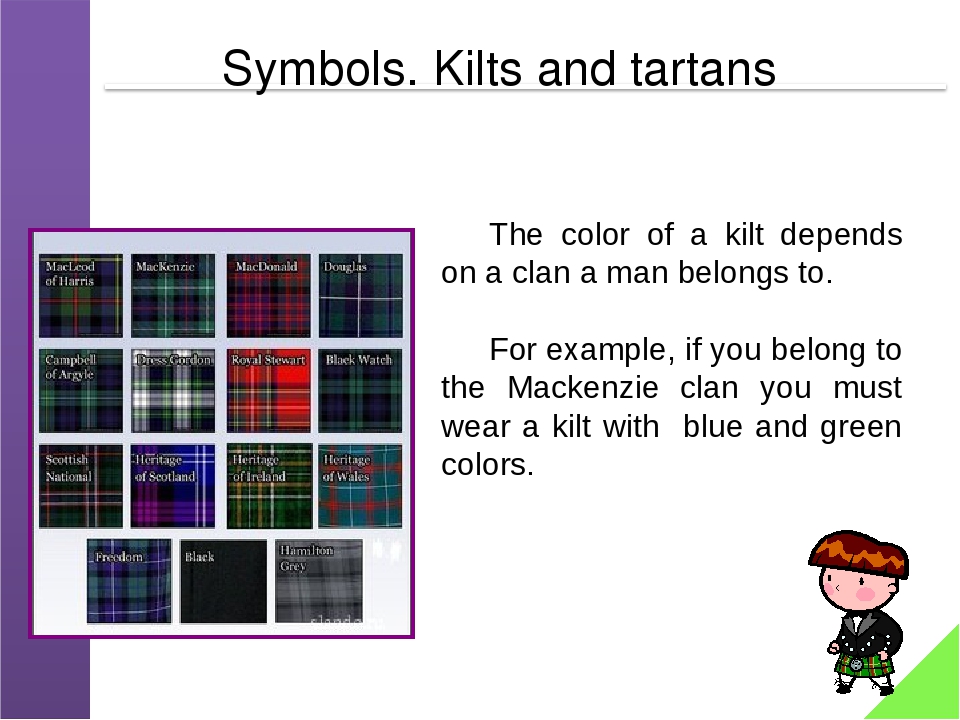 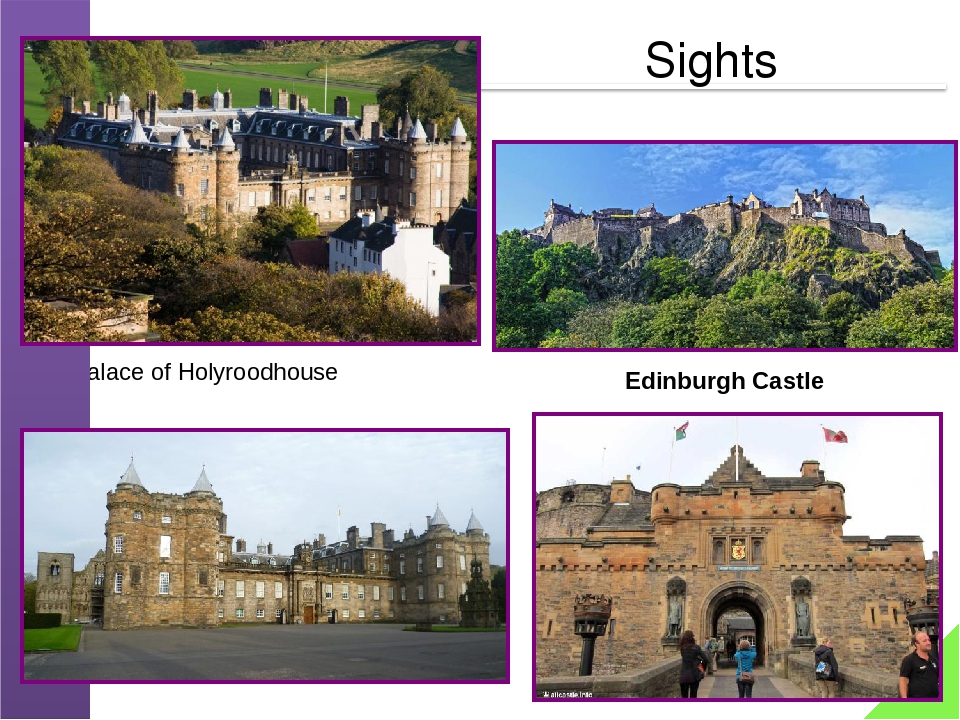 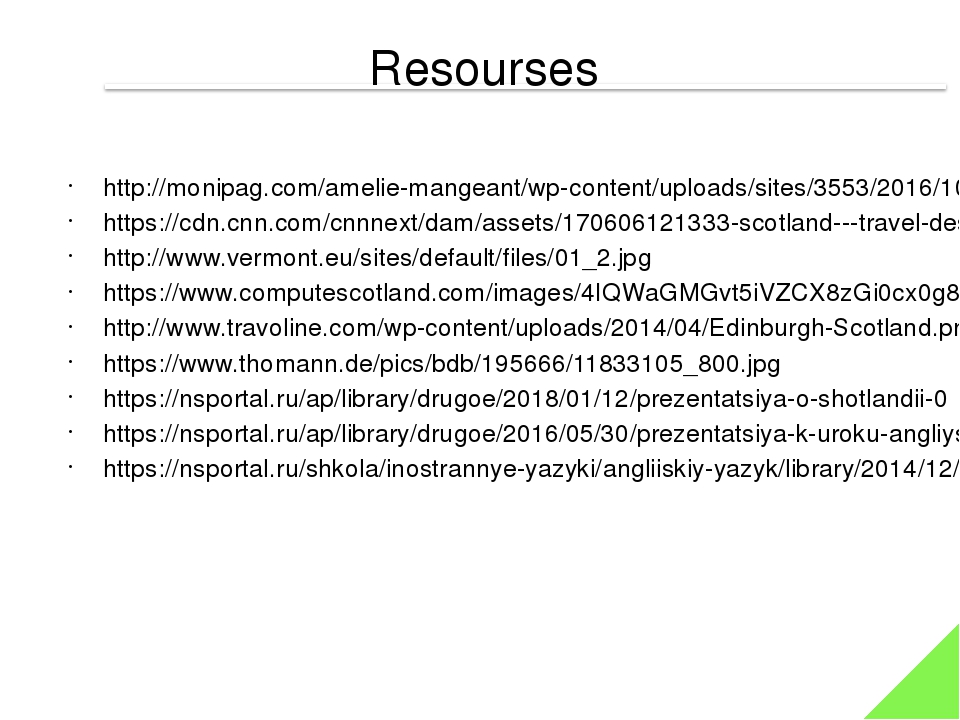 GLASGOW IS THE LARGEST CITY IN THE COUNTRY

Thistle became the emblem of Scotland in 990 during a battle. According to the legend scots knew about approaching of their enemies, because one of them unfortunately stood on the spiny plant and shrieked out in pain. Thistle symbolizes the courage and independence of Scots. Symbols. Thistle

It’s the National musical instrument of Scotland. It Sounds in every city of this country. No holiday is celebrated without playing bagpipes. The history of this instrument is very ancient. It’s usually produced with leather covered with the traditional tartan cloth. Only men are able to play this instrument, because it demands much power and physical strength. Symbols. Bagpipe

The color of a kilt depends on a clan a man belongs to. For example, if you belong to the Mackenzie clan you must wear a kilt with blue and green colors. Symbols. Kilts and tartans

Despite its small size, Scotland has many treasures crammed into its compact territory – big skies, lonely landscapes, spectacular wildlife and hospitable, down-to-earth people.

Scotland is bounded in the north and west by the Atlantic Ocean, and in the east by the North Sea. The mainland stretches 440 kilometers from north to south, has a maximum width of 248 kilometers and is grinded by numerous islands, of which the principal group are the Orkney and the Shetland islands to the north and the Hebrides to the west. The total area of Scotland is 78,800 square kilometers, representing 32% of the area of Britain. The coastline, including that of the islands, measures some 10,100 kilometers.

There are two main cities in Scotland – Glasgow and Edinburgh. Glasgow with its satellite towns, forms the huge industrial heart of the Lowlands. It grew in pretty countryside into a great city, starting first in the 17th century as a major seaport. Glasgow with its fine buildings, excellent shopping beautiful parks, museums and art galleries attracts thousands of visitors each year from every corner of the globe. Today Glasgow is Scotland’s largest city.

Symbols. The first national Scotland`s symbol is thistle. Thistle flower is a semi-official national symbol of Scotland and is depicted, in particular, on bank notes. Thistle has become a symbol, as a result of winning a battle. According to legend, in the XIII century coastal settlement of Scots suffered from Viking raids. One managed to avoid sudden night attack by the fact that the Vikings went barefoot in a thicket of Scotch thistle, than gave themselves. Thistle is the floral emblem of Scotland. The symbol is widely used in the Scottish and British heraldry, logos, as well as on British coins.

The next symbol is bagpipe - the national musical instrument, the unofficial symbol of Scotland, an ancient Scottish instrument. Is a reservoir of sheep or goat skin, turned inside out (goose), to which are attached (attached ) Three Bourdon tube (drones), one tube with eight playing holes (chanter) and a special short tube for blowing air . Has a simplified air flow - through ancillary pipe - provides the freedom of the right hand.

When playing musician (piper) fills the air tank and pushing it down the elbow of his left hand, makes sound and game Bourdon tube, in turn equipped with special reeds (canes), and, Bourdon tubes are used in single and double tube in the game canes, made of reeds.

The third symbol of Scotland is tartans. Tartan - ornament formed twill weave, pre colored in different colors, resulting in a checkered pattern consisting of horizontal and vertical lines as well as rectangular areas filled with diagonal stripes. Tartan is used for coloring plaid and can symbolize a certain clan, as well as terrain or organization. Scottish kilts almost always have tartan pattern.

Sights. Edinburgh Castle is a historic fortress which dominates the skyline of the city of Edinburgh, Scotland, from its position on the Castle Rock. Archaeologists have established human occupation of the rock since at least the Iron Age (2nd century AD), although the nature of the early settlement is unclear.

The Palace of Holyroodhouse commonly referred to as Holyrood Palace, is the official residence of the British monarch in Scotland, Queen Elizabeth II. Located at the bottom of the Royal Mile in Edinburgh, at the opposite end to Edinburgh Castle.

Scotland is very beautiful country and if you visit it you shall never forget it.